Vita Ersatz – Dollerie Uncut
Announces the first quarterly day-long livejournal doll posting event!
Sunday, July 6, 2008!
Throughout the day, post your doll pictures uncut!
Please keep the individual posts to seven images only and do not piggyback your posts –
the effect being that our friends lists will be populated with a wild and wonderful variety of uncut doll imagery!
In order to further spread and share the Dollerie, we are suggesting
that images remain unlocked and that you link back to the person who
posted their pictures before you, as not everyone has the same friend
list. Anyone can post at any time. and will
start the show Sunday morning.
===
Hey, 1:30 am, it’s actually happening today–and I need to go to bed.
A lot of my pictures come as part of a sequence, they don’t really stand alone as a suitable subject for the Ersatz posting. I thought I was shooting a set today for that purpose, but the dolls decided to have fun. *Every* time I turned off the camera, they would fall into another droll posture and *demand* to have the next set of shots taken. Dance kept dumping his wig in Emma’s hands, which has become a bit of an in-joke between them. Finally, when Emma was about to accept apologies all around and cuddle the boys, I set up a new angle and discovered that, without *my* posing him that way at all, Dance had somehow jammed his hand up in her pants in a rather personal manner. Then, when I started shifting them to allow for this, he again dropped his wig in her direction. You just can’t make this stuff up.
So this is another Flicker set posted to spam my doll flist. 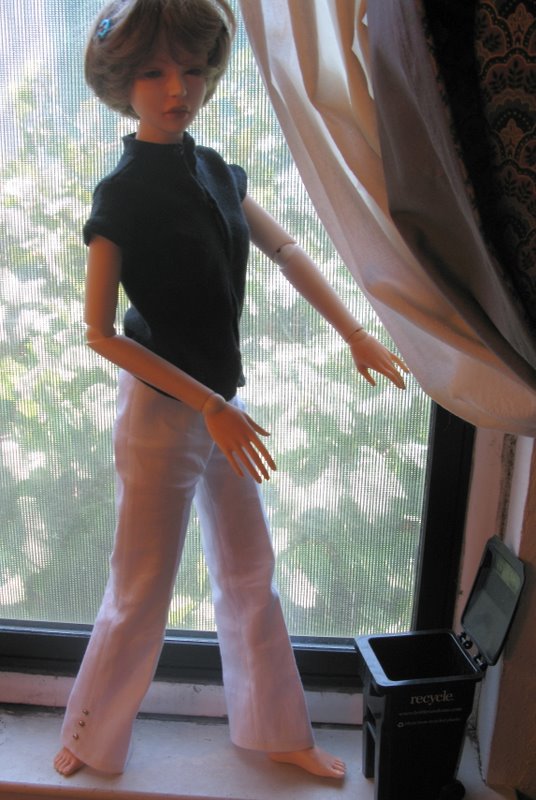 slideshow here:
https://www.flickr.com/photos/girdethsvoice/sets/72157606005049285/show/
I will explain a bit, as I don’t think these two shots from the sequence tell you exactly what’s going on. As characters, these resin folks have evolved a long way already. I should add all three of them are involved with each other, and they seem to be ridiculous happy, in many ways, but somebody still has to take the trash out.
If you thought the complexities of a regular couple are work enough when you count jobs and chores and pets, so adding in another web of obligations is more work yet– well, you’d be right. 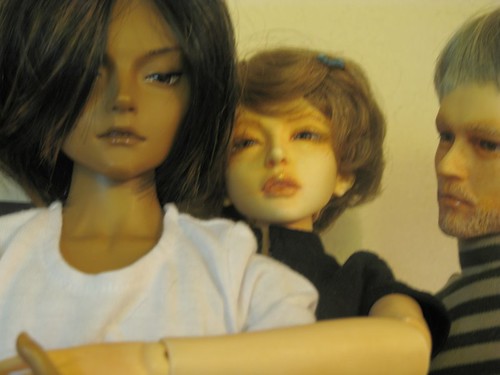 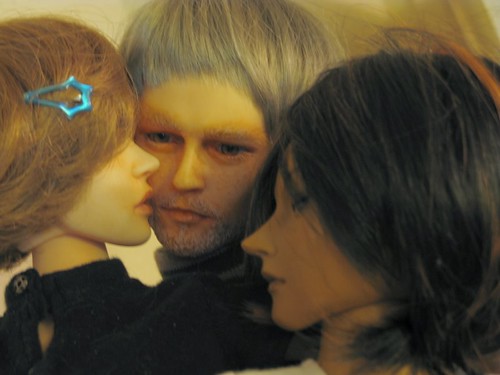 As a newb, I hadn’t realized how much a doll will evolve over time without even changing a faceup at all.
I had commented elsewhere on an old use I made of Photobucket for remix/slideshows I’d done.
These offer a comparison with how Dance looks now, for those folks who have friended me more recently. This is where you get to see Dance in his earliest look.
The pix in this first remix were done before he even had chairs or a bed of his own. It starts off with my comment that he has amazingly long legs–no wonder Dance was amused by this.
When I look at my other resin folks now, Dance looks exactly the way his character is described in the books originally: short, heavy, strung tightly, hard as a rock. As resin person he is not as amazingly flexible as his fictional counterpart, but he manages quite well in many aspects, thank you.
In this one, he’s talking about wanting a resin boyfriend. If you ever had any doubt about his intentions, I think he’s made it clear enough here. This isn’t the really rude remix, either! Dance has been amazingly consistent about the whole thing. As Photobucket had some issues, I had to edit this one to reattach the pictures, so it’s back together now in roughly the original order of ideas.
This one was done a little later on, where I was trying out different wigs.

No Gentleman.
View all posts by Stella Omega →

This site uses Akismet to reduce spam. Learn how your comment data is processed.